Explore Lisbon aboard the mythical Tram 28

The Lisbon trams are to the Portuguese capital what the red double-decker buses are to London: real time machines that are part of the scenery and which allow us to explore in the most picturesque ways. Line 28E is the most emblematic, offering a particularly wide range of discoveries, between monuments and hidden treasures.

Born in 1914, the legendary line 28E ("E" for "eléctrico") of the Lisbon tramway serves the center of Lisbon and its hills. This hundred-year old means of transport is undoubtedly the best way to furrow the most beautiful steep streets, while sparing the tedious exercise of traversing these paved slopes on foot. If it still looks like a collector's toy, this "Remodelado" (historic tramway) has two qualities that modern trams do not have. There is of course the old-fashioned charm of this unique yellow car with polished wooden benches. But the bumpy vehicle has especially the technical possibility to take a circuit with tight turns, on steep hills. 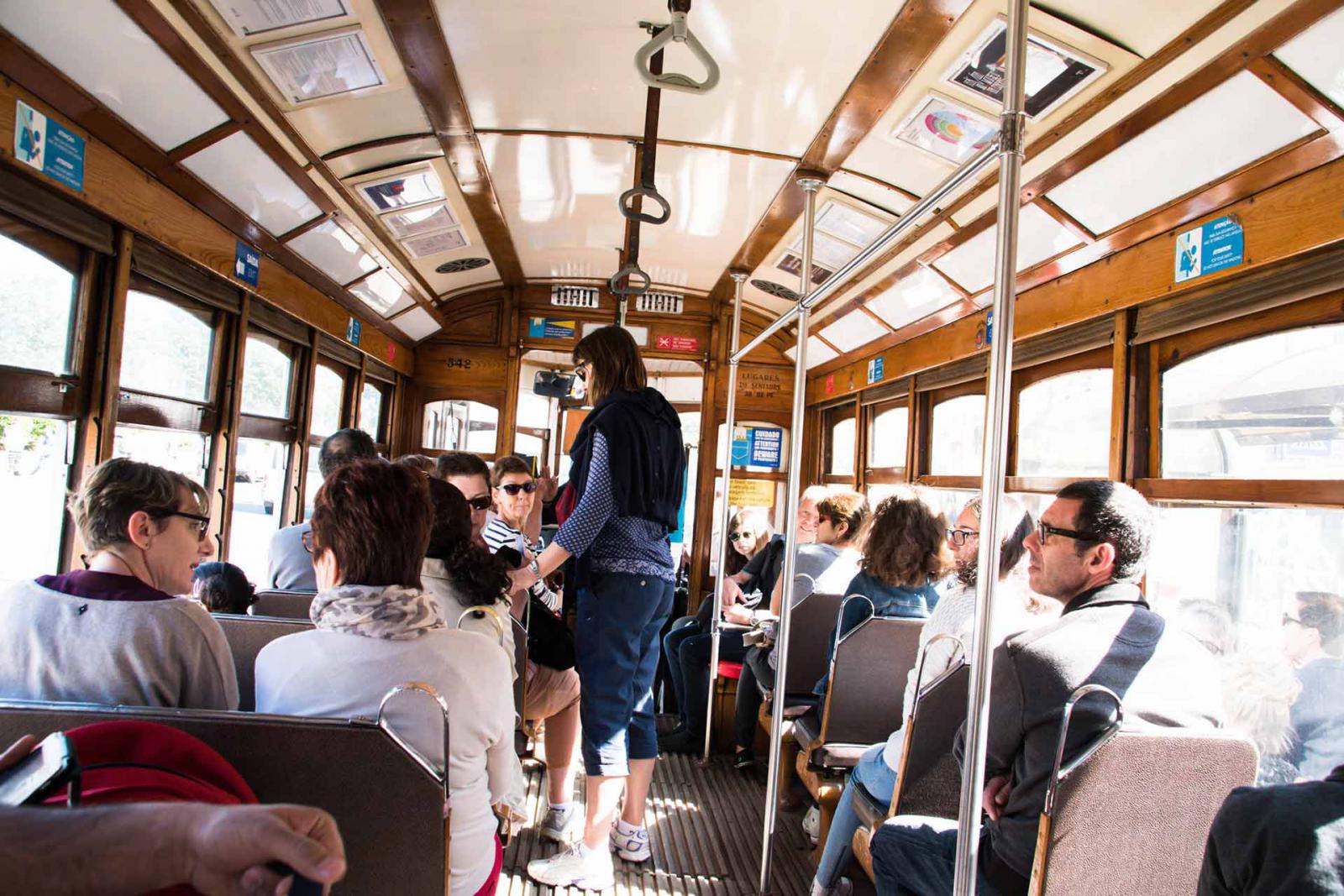 From its departure in Martim Moniz Square, until his arrival at the cemetery of Prazeres in the district of Campo Ourique, the 35 stops of line 28 can be done in a good forty minutes. But you can also choose to use it in a "hop on / hop off" style, spend the day exploring the most remarkable surroundings, and enjoy good addresses that we recommend here.

Let's brush against the walls in the climb up on Graça Hill: here beats the heart of a popular Lisbon. It is in this area, a few minutes’ walk from the Rua de Graça stop, that you can access one of the most beautiful views of the city of Ulysses. Because who says hill, says point of view! Unmistakable, the Miradouro da Senhora do Monte is the highest, and certainly one of the most beautiful, lookouts of Lisbon. It offers a breathtaking view of the medieval Castelo de São Jorge, and a panoramic view of the old town until the 25th of April Bridge.

The tram then passes right in front of the white monastery of São Vicente da Fora, museum and burial place of the Portuguese kings: take the time for a royal stopover. The cloister of this monastery is decorated with azulejos of the eighteenth century where the French tourist will easily recognize an illustration of 38 fables of the poet Jean de La Fontaine. Cloister which today houses the Royal Pantheon of the Braganza dynasty. It contains 44 tombs, including that of Queen Amelia (dona Amelia d'Orleans and Bragança), the last queen of Portugal, born in France. Then think of climbing to the terrace to enjoy a 360 ° view of the city called "Queen of the Tagus".

Opening hours: Tuesday to Sunday, 10 am to 6 pm 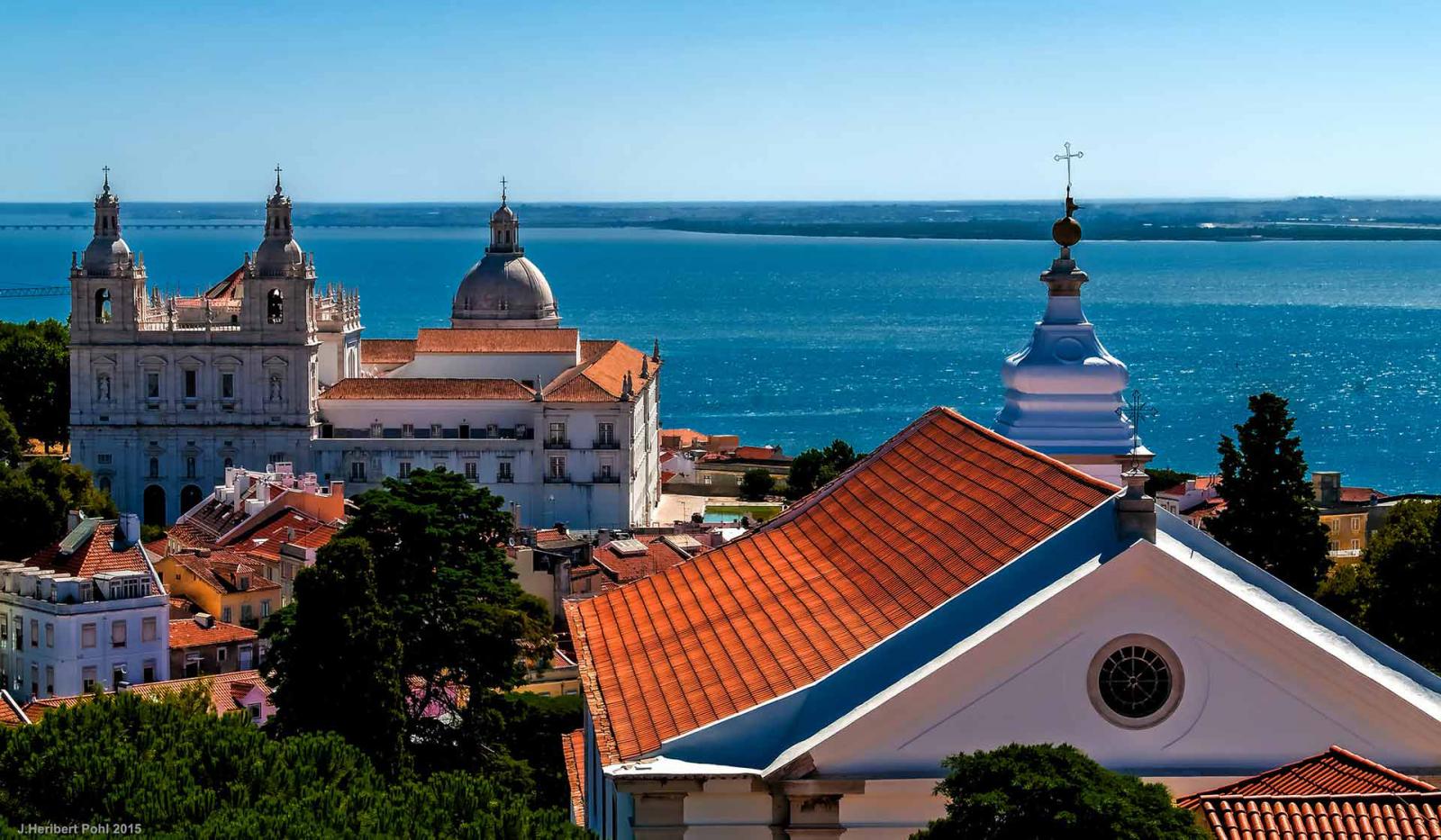 We leave this old district of Graça to find another: the Alfama, just at your feet. The stop at Largo da Portas do Sol is a must for any stay in Lisbon. This image of Lisbon that we all have in mind is here: the red roofs, the white dome of the Pantheon, the blue of the Tagus. This is an opportunity to immerse your eyes in the soul of Lisbon from the wide terrace of the cocktail bar Portas Do Sol. In a lounge atmosphere, you can enjoy a brunch or a light meal and sip a ginja or a bica, while imagining walking narrow alleys (becos), stairs and vaulted passageways down the slopes.

Opening hours: Monday to Friday, 9 am to 7 pm

A hundred meters further, the belvedere of Santa Luzia is another must to observe the city. Our # 28 streetcar continues its journey, shaking between the fine groceries stalls and other stores, in the typical neighborhood that survived the 1755 earthquake. Hop off! Not far, we can deepen cultural immersion by visiting the space A Arte da Terra, a cooperative showcasing and selling of Portuguese crafts in a vaulted decor, and where it is possible to taste local wines and pastries.

Opening hours: every day from 11h to 20h Visit poets in the Chiado district

A few bends and jolts later, after crossing the district of Baixa, the journey of the small but legendary yellow tram continues in Chiado. You can greet the statue of the famous Portuguese poet Fernando Pessoa, seated on the terrace of Café A Brasileira, which we mentioned in a previous post. The neighborhood boy, lover of coffee, was a regular at the now-century establishment. It is one of the oldest in the capital, an institution that has kept its 1900 decor, and its traditional public intellectuals (but now, many tourists). Some pasteis de nata and an espresso near his favorite table will perhaps inspire you a few verses in tribute to the beauties of Lisbon?

The Chiado district is also named after the poet Antonio Ribeiro, said ... Chiado. Not surprising to find, a little further, the statue of another writer, Luis de Camoes, in the square of the same name. Popular, royal, the capital is here also literary.

Opening hours: every day from 8h to 2h 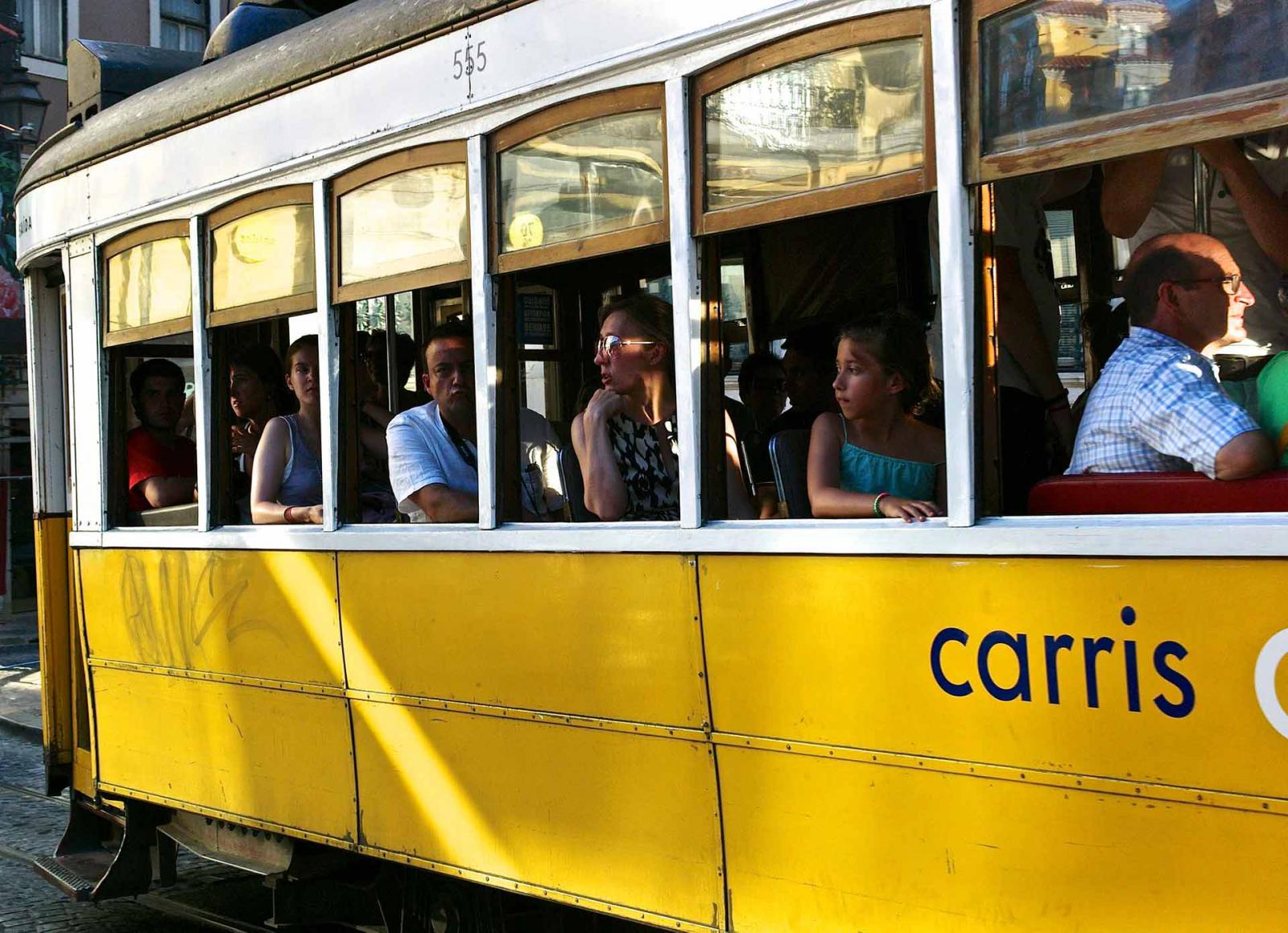 An arrival under the lucky star of Estrela

The journey of the tram 28 is about to end, even still before our eyes Lisbon monuments continue to flash: The National Assembly, or the funicular da Bica. It finally enters the historic district of Estrela, around its basilica of white marble in Baroque style. The Estrela Garden, just opposite, is a stop where you can stroll among the exotic trees or sit on a bench - much more relaxing than those often crowded with turbulent electrico.

And since we are in the Etoile district, why not cap off your escapade with a dinner in a gourmet restaurant rewarded by the Michelin Guide? The Loco, located near the Basilica of Estrela, unveils to its customers its kitchens in a very fashionable decor. This establishment which sports a Michelin star is that of Alexandre Silva, first winner of Top Chef Portugal, who likes to value the local products. A perfect ending to end the trip so characteristic that offers the tram 28E in the heart of the various flavors of Lisbon.

Opening hours: Tuesday to Saturday, from 7 pm to 11 pm 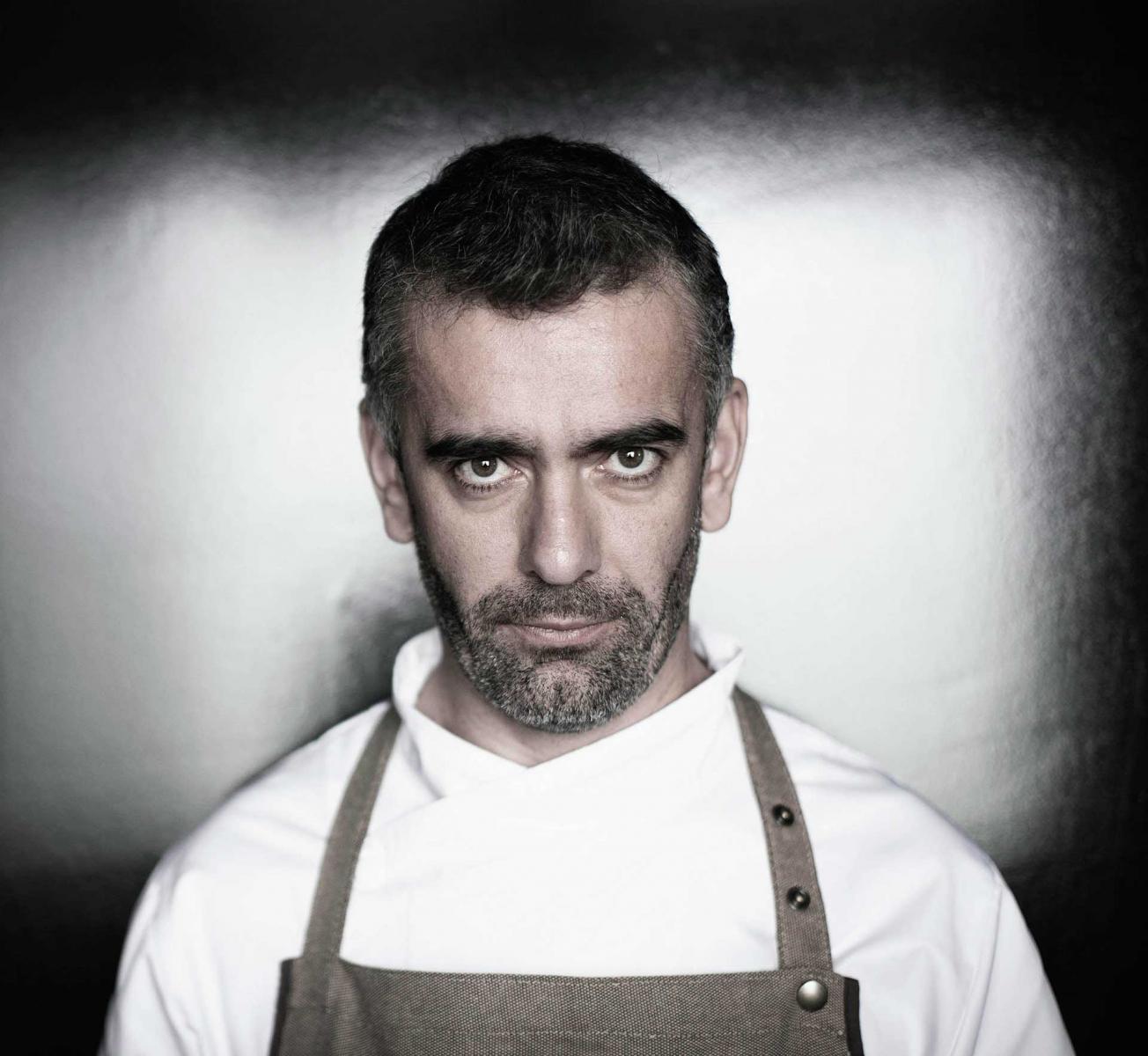 Last tip before going on board: remember to bring your pass Viva Viagem 24h Carris network, and to choose your schedule to avoid the crowd.