Sintra, a must-see getaway from Lisbon

Located just 30 kilometers from the Portuguese capital, Sintra is definitely worth a detour when staying in Lisbon. Classed in 1995 as a UNESCO world heritage site, it offers remarkable landscapes and monuments, giving it the nickname of "glorious Eden". In one day or more, discover this unmissable destination, whose multiple palaces will amaze you...

Not to be missed

The national Palace of Sintra 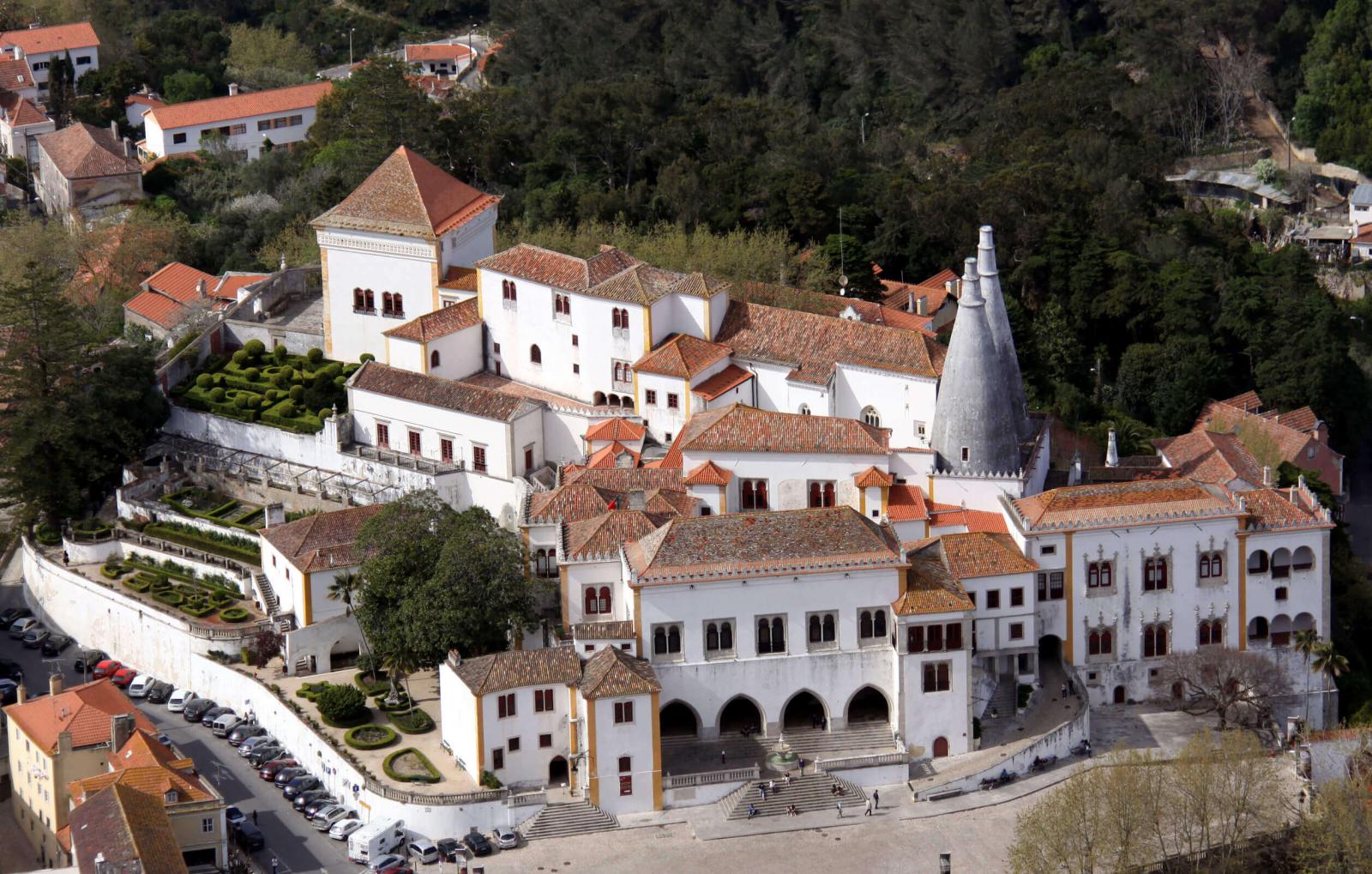 A mixture of medieval, gothic and romantic architecture, the construction of which began in the 14th century, the National Palace of Sintra was the stronghold of the royal family until 1910, when the monarchy ended in Portugal. It is especially the magnificent azulejos - the famous Portuguese ceramic tiles - that decorate the many rooms of the royal palace that are worth the detour. There are azulejos from the 14th to the 18th century, including authentic Mudejar azulejos, with Moorish geometric motifs. Another remarkable part of the palace, the colossal chimneys, built in the 14th century to prevent the kitchens from being smoked. They are visible for miles around, one imagines then the greatness of the banquets that required chimneys so massive! 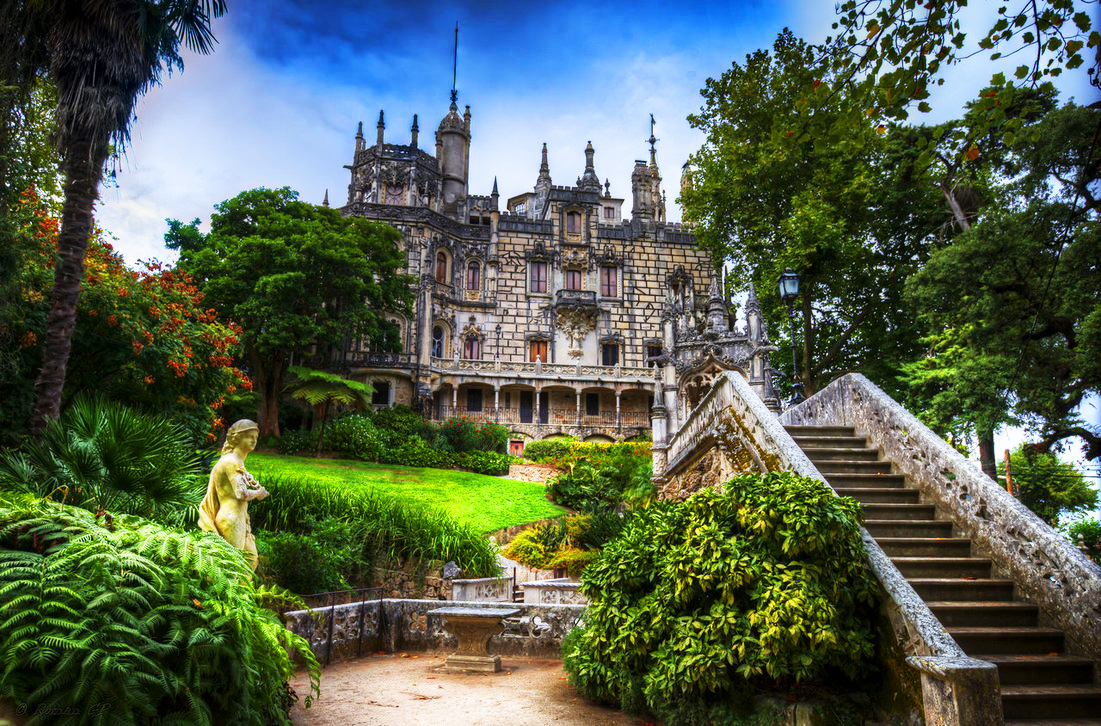 La Quinta da Regaleira is an estate built in the historic center of Sintra in the 19th century. References to alchemy, mythology, Freemasonry and Templars are numerous, both in the architecture of the palace and in the design of the park that surrounds it. It is an enchanting domain, as much by the quality of the work of architecture, as by the symbolism released. The mysterious palace and the Edenic gardens are remarkable for this reason.

In particular, one can discover the initiatic wells, a little less than 30 meters deep, which expresses the symbolism of life and death, paradise and hell, and that one crosses by passing through several stages (represented By the floors).

The various gardens, caves and lakes that surround the palace are mysteries to be questioned by visitors... Near the entrance to the park of Regaleira is the Seteais palace, dating from the eighteenth century, now transformed into a hotel. And do not hesitate to climb up to the belvedere, from where you can see the palace of Pena (Palácio da Pena), the castle of the Maures (Castelo dos Mouros) and the sea in the distance... 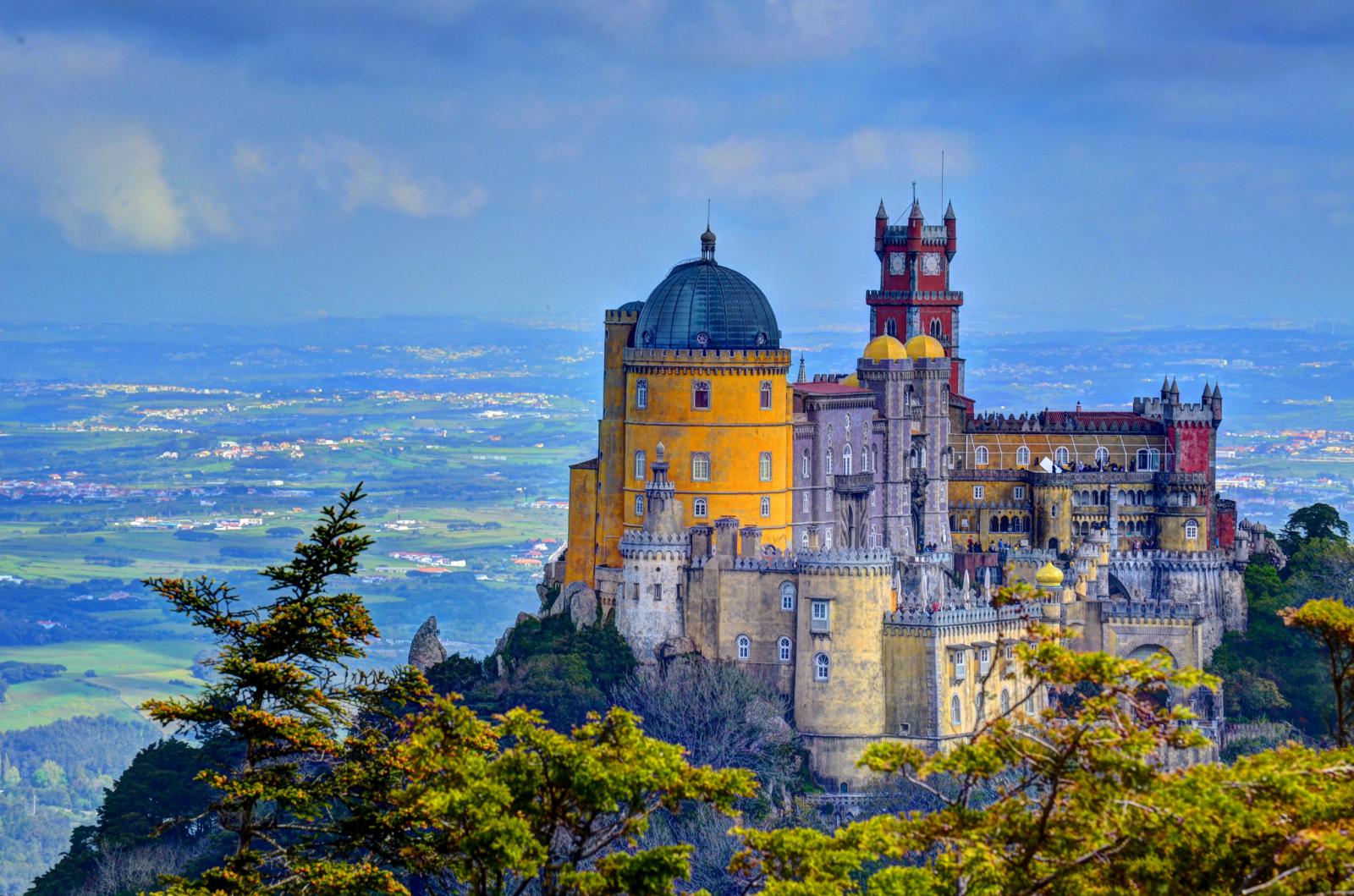 The Palace of Pena is so unique that it was considered in 2007 as one of the Seven Wonders of Portugal. It is the first palace in Europe to have been built according to the architectural style of Romanticism, and it is this extravagant architecture that inspired Disney studios to draw fairytale castles. With its bright colors and Moorish inspiration, the exterior is simply remarkable. The gardens are also bucolic and we advise you to climb up to the cross "Cruz Alta", from which the view is superb, and from where you can admire the whole Palace, placed on its hill.

If you have more time

The Castle of the Moors 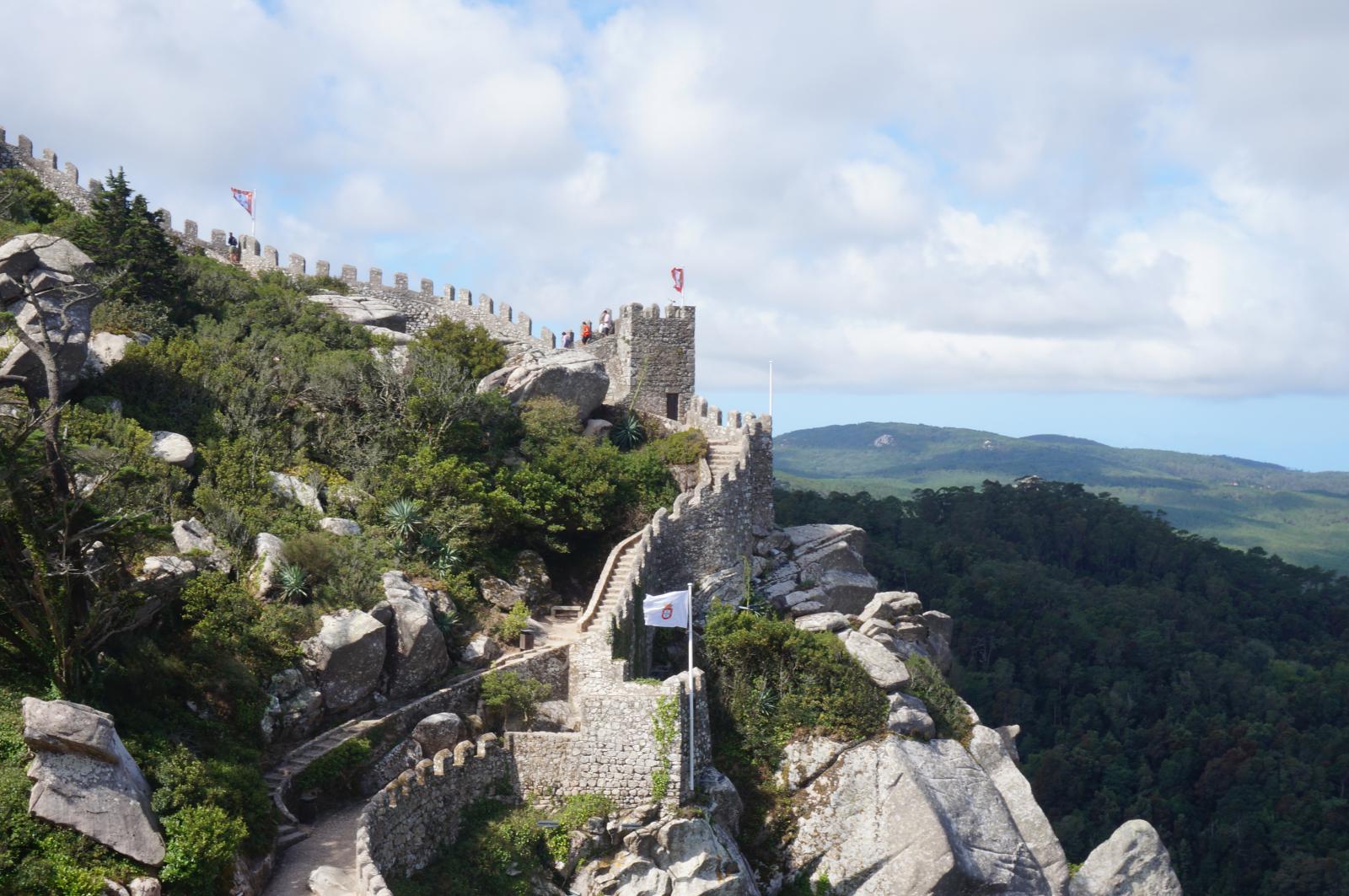 The Castle of the Moors was built during the nineteenth century by the Moors of the Maghreb to monitor the city of Sintra, but was abandoned after the conquest of Portugal. High battlements, fortified walls, solid ramparts, the visit plunges you into medieval times. From the highest points of view, the panoramic views of the hills of the Serra de Sintra and the plains extending to the Atlantic Ocean are exceptional. 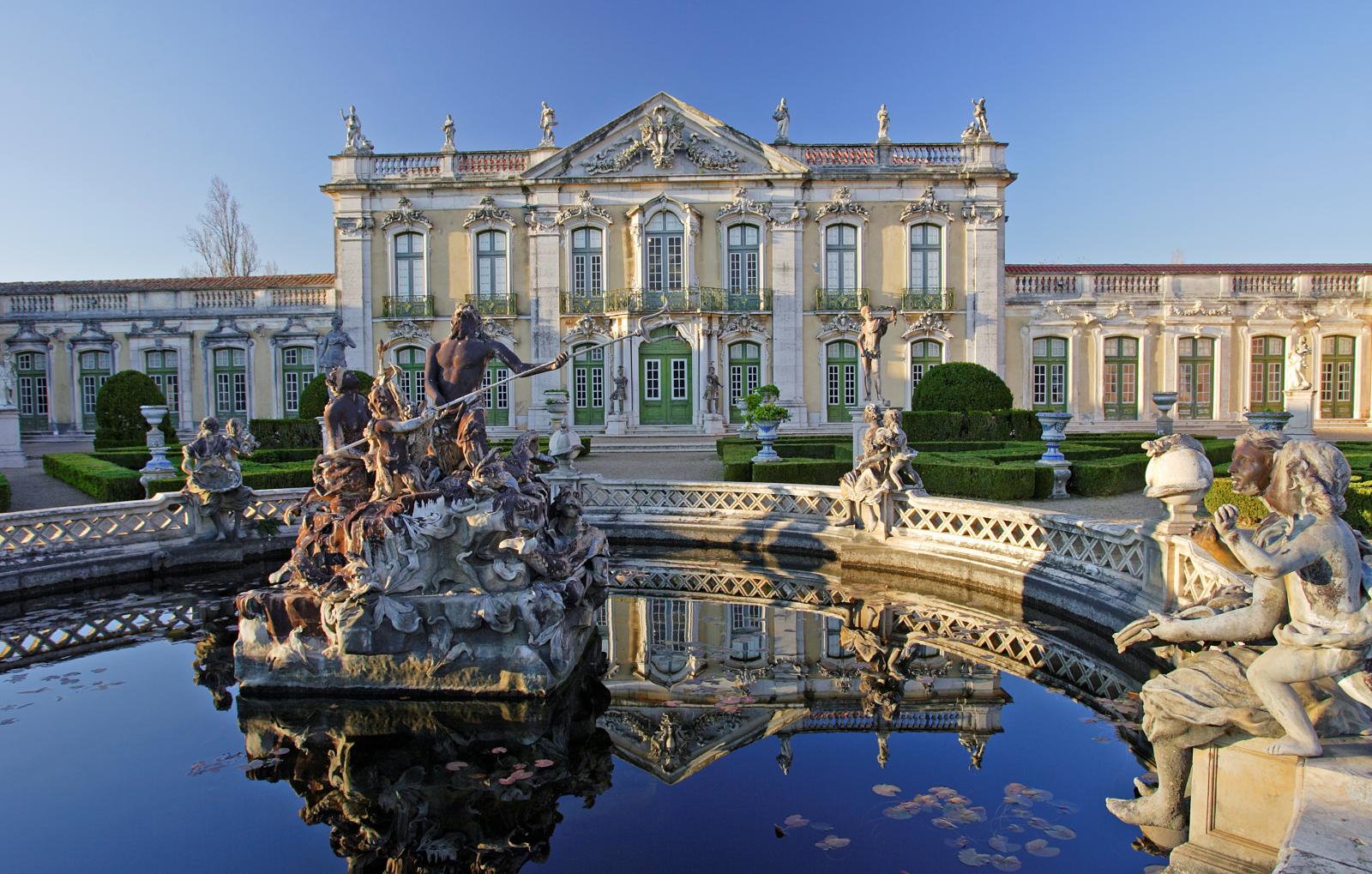 The Royal National Palace of Queluz was commissioned by Pedro III, future king of Portugal, and became the summer residence of the royal family from 1794 to 1807. It is still considered a jewel of Portuguese heritage: the opulence of Its decoration, the participation in its construction of the greatest architects of the time as well as its sumptuous garden in the French style, is for many, the Portuguese Versailles. One of the wings of the palace, the Lady Mary Pavilion, is today the residence of foreign Chiefs of State visiting Portugal. 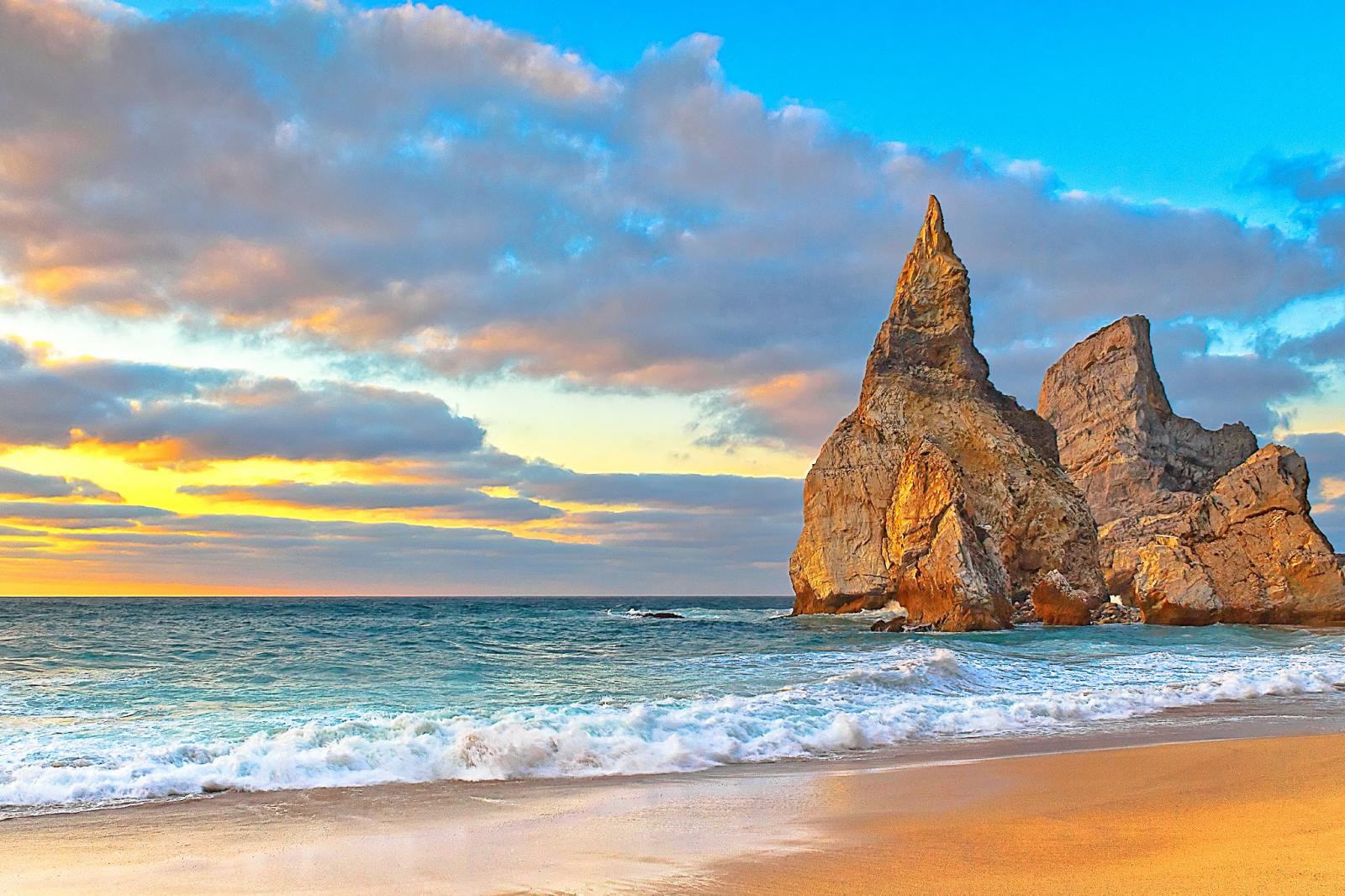 It’s a 30 to 40 minute sporty walk (pack your sneakers rather than sandals) to reach the Ursa beach, but the reward is at the height of the effort! A very quiet beach, fine sand, rock formations nicknamed Ursa and Giant, and which gave its name to the beach) which gives it a particular charm...

The most convenient way to get to Sintra is probably the train, direct from the center of Lisbon from the Rossio train station. A train passes every 20 minutes during the day between 7 am and 11 pm, and the journey lasts only 30 minutes. The station of Sintra is the terminus of the train: you then have a kilometer and a half to get to the center of the city. A bus system, line 434, connects the station to the city center and to the three palaces of the city. The bus runs every forty minutes, so the wait can be a bit long...

By car, arrive very early before the opening of the offices, shops and palaces to hope to find a parking space near the Palace of Pena. Alternatively, enjoy one of the unguarded open-air car parks close to the station; From there you can take the bus 434 to Pena.