Discover Largo do Carmo and its romantic charm

Largo do Carmo is a small quiet place on the heights of Lisbon. To be discovered during those moments when the crowd of tourists has moved away, it has a discreet charm, with its fountain surrounded by jacarandas. Instead of hurrying to take the Santa Justa lift, you can go up the alleys of Chiado, before reaching Largo do Carmo all while savoring the peaceful atmosphere that emanates from this place. 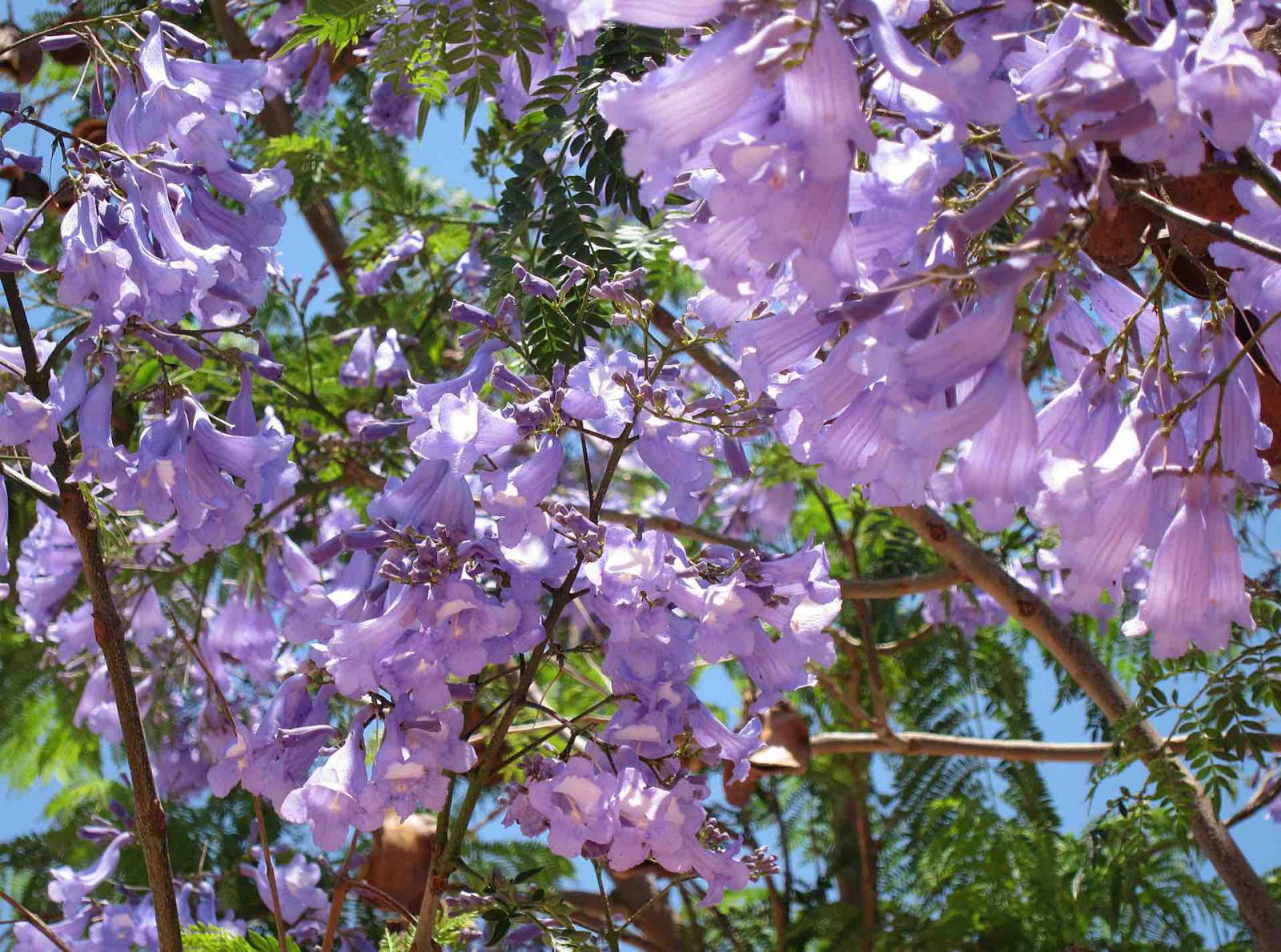 A small square to discover in the spring, in the middle of the flowers

The Largo do Carmo is particularly spectacular between mid-May and early June, when the jacarandas, also called blue flamboyant, bloom. These trees originating from South America, and especially from Brazil, are covered with clusters of flowers of a delicate violet blue. These are the same trees that adorn the gardens of Mamounia in Marrakech.

In the middle, a graceful fountain thrones the square, also known as Chafariz do Carmo. This is the only niche type fountain in Lisbon: four pillars meet above the basin, connected by four arches surmounted by dolphins. Built in 1771, it was designed by Reinaldo Manuel dos Santos, in a style that mixes classical and baroque. 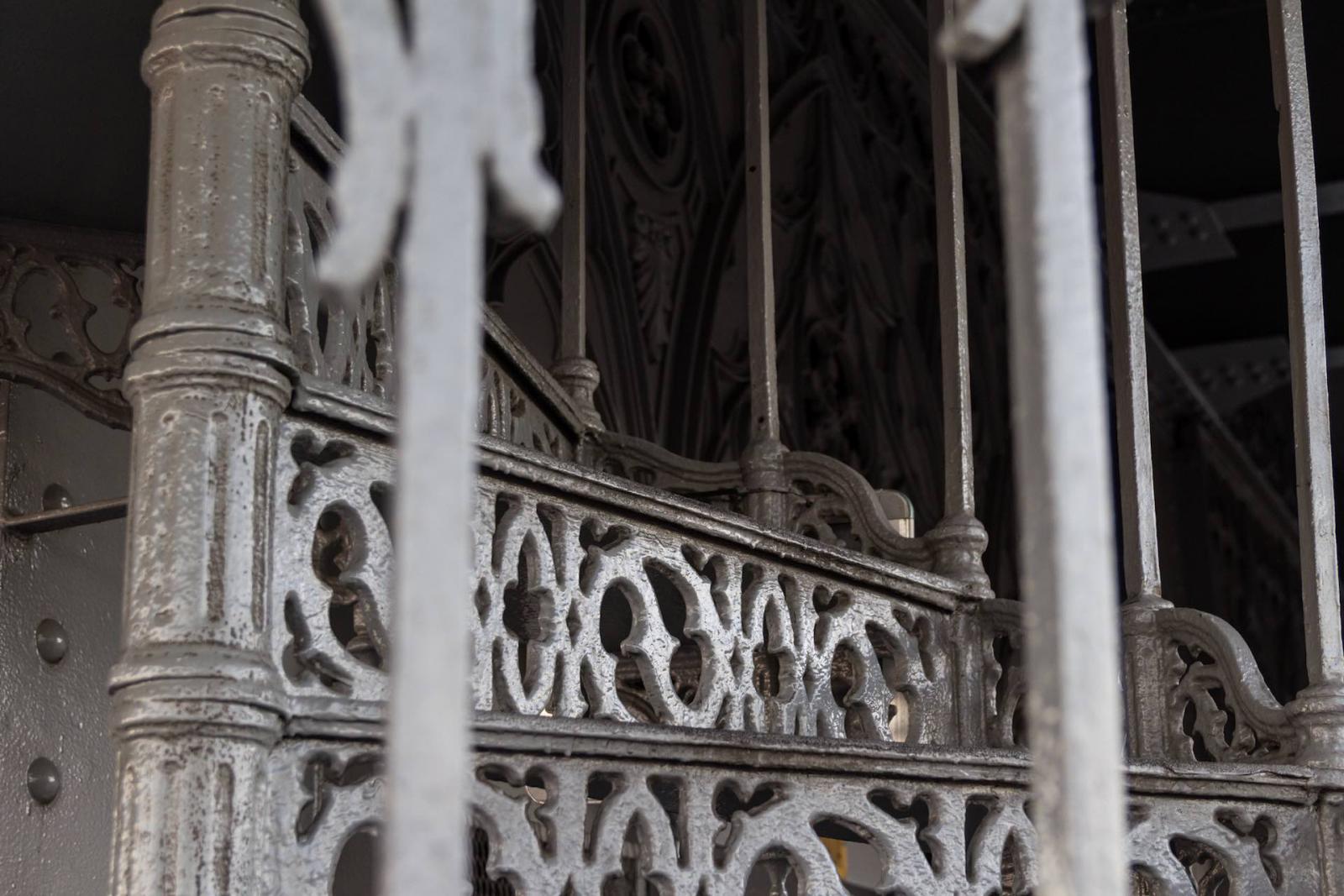 The Elevador de Santa Justa is not a must...

Most travel guides take great care to recommend using the Santa Justa lift. This "elevador" is one of the four that Lisbon has. In the city of seven hills, it would be necessary to climb, at one time or another ... The famous elevadores, symbols of the city and cherished of the tourists, partly solved the problem, providing a means of rapid ascent and easy to the places in the city where the elevation is a little rough.

The particularity of the elevador of Santa Justa is to be a real lift, while the other three, the ascensores of Lavra, Gloria and Bica, are funiculars that used to function hydraulic powered and today with electricity. All were designed by the same engineer, Raoul Mesnier du Ponsard. Contrary to the legend, Mesnier du Ponsard was not the student, or even the admirer, of Gustave Eiffel, with whom he had no connection, although it is true that many see similarities between the Santa Justa lift and the Eiffel Tower.

The Elevador de Santa Justa was built in 1902, in a graceful neo-Gothic end of century style, and connects the Rua de Santa Justa to Largo do Carmo. At Rua de Santa Justa, its slender silhouette forms a surprising contrast with the street, which seems suddenly narrow, and the buildings, that the elevador dominates from the top of its 45 meters. At the top, an ornate metal walkway connects the elevator cabin to Largo do Carmo; You can also climb to the belvedere, which gives a magnificent panoramic view.

However, one can put in front of the influx and the long wait: at peak periods, it is necessary to queue between 20 minutes and one hour to take the elevator, very popular with tourists. While the same walk takes only a few minutes - if you do not linger on the way in front of the windows of the many shops of Chiado...

So, remember, the possibility of having, from the bridge or from the lookout, a breathtaking view of the hills of Lisbon, the Tagus, the roofs of the city, and the Convent of the Carmelites. However, no need to take the elevator to enjoy all these beauties.

Elevador de Santa Justa - entrance included in the Lisbon Card or CARRIS / METRO Pass 24h, or € 5,15 for the elevator, plus € 1,50 for the belvedere (access to the bridge free). 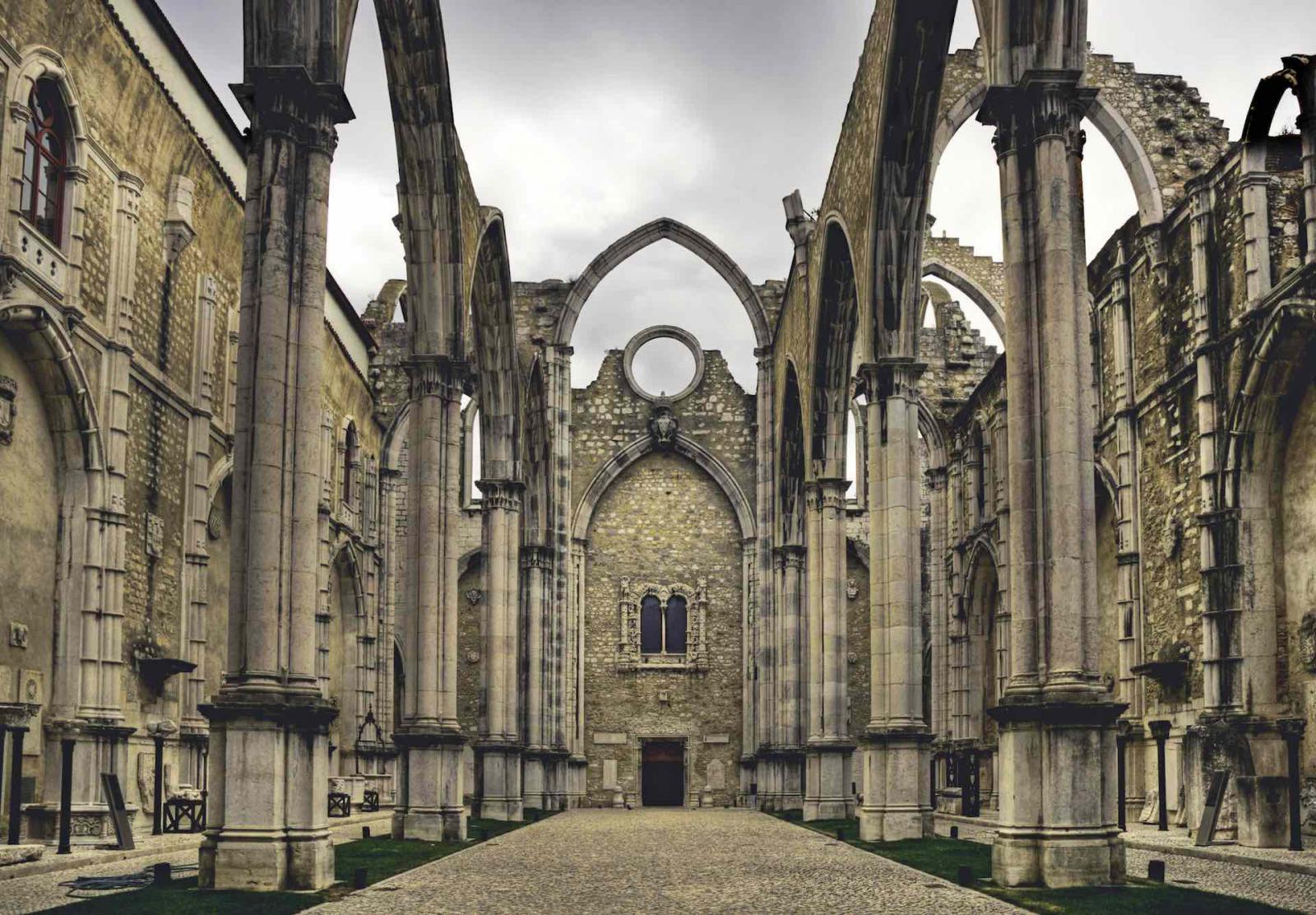 Convento do Carmo and the Archaeological Museum of Carmo

The Largo do Carmo square takes its name from the former Carmo Convent, founded in 1389 and largely destroyed by the 1755 earthquake. The building has never been (purposefully) restored. the only building in Lisbon that gives an idea of ​​the extent of the damage. This gives it, even under the intense sapphire sky and the hot summer sun, an aura of melancholy. Sic transit gloria mundi...

The imposing exterior walls of the old church stand upright and white like cliffs; but when you get inside, you are surprised to see the majestic arches that rise into the void, the earthquake completely destroyed the roof. We thus enter an open church with a very special charm.

Only a small part of the interior survived. In an apse of the church has found refuge a small archaeological museum with eclectic sympathy. There are scattered remnants of all periods of Portuguese history, Gothic tombs (including that of Denis I The Laborer, which features scenes of hunting boar), fountains, steles, windows from all over Portugal.

On the gothic sarcophagi, the carved scenes show a luxury of detail: that of Don Fernando I presents on one of its faces a bucolic landscape of groves, with in the foreground a staircase on which a small individual sat to read, at the exit of a church.

The collection also includes prehistoric artefacts discovered during a search on the site of Azambuja, in the Alentejo region, dating from 3500 to 1500 BC Finally, for those who have the heart well attached, or who dream of Indiana Jones, two pensive Peruvian mummies of the 16th century look at the visitors, squatting in their windows. 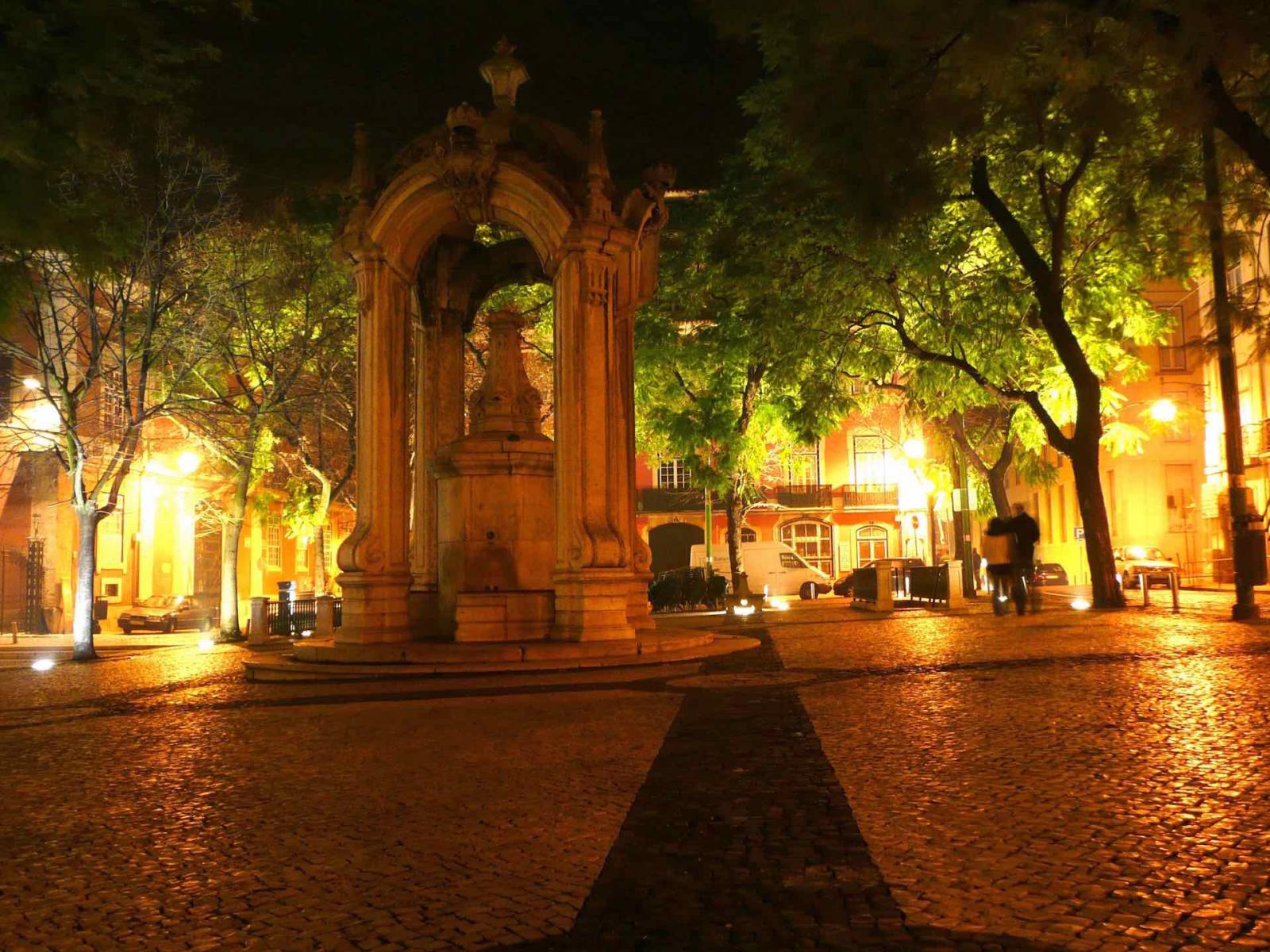 The austere white facade of the Saint-Roch church hides well its game. Under a very severe and, at the same time, boring exterior, it contains a most sumptuous interior. The side chapels adjoining the main nave are, each in their own way, a jewel of Baroque art.

The most impressive, and rightly so, is the chapel of St. John the Baptist, in the Rococo style. It is a debauchery of gold, silver, marble and precious stones, agates, lapis lazuli, amethysts. The striking scenes of the Apocalypse are recreated in mosaics: some of the tesserae that make up these paintings do not measure more than 3mm. Commissioned by King John V the Magnanimous, the chapel was created in Rome by two Italian artists, then blessed by the Pope himself, before being dismantled piece by piece and transported by boat to Lisbon.

The chapel is separated from the church by a balustrade of green marble; on the floor, a mosaic of fine stones represents the armillary sphere, symbol of the kings of Portugal. Lapis lazuli columns seem to support a hexagonal vault decorated with heads of putti.

The rest of the church, “soberer” (if we can speak of sobriety for baroque art), is beautiful. The ceiling tricks the eyes, the azulejos, the vaults of the chapels, the twisted columns decorated with vine leaves, give the whole a haughty serenity.

In the professed house, next to the church is a small museum of religious art, which also houses the treasure of the chapel of St. John the Baptist. This part of the museum was formerly the home of the Jesuit brothers who founded the church.

Do not forget to spend some soothing moments in the cloister, decorated with a landscaped garden that brings together four species of bamboo around a rectangular water mirror.