At the beginning of the 20th century, old Europe moved under the blows of a generation's thirst for novelty. In Portugal the first earthquake took place in 1910 - not tectonic like the one of 1755, but political. On October 5, 1910, the Republican party overturned the constitutional monarchy: the day before, on October 4, they obtained the majority of the seats in Lisbon, and the electoral result was accompanied by a popular uprising. On October 5, the Republic was proclaimed.

These events opened a period of radical, accelerated and heated change: Portugal had no less than 45 governments, 8 presidents of the republic, 7 legislatures and 5 dissolutions of Parliament between 1910 and 1925!

Futurism, the urge for a new beginning

Born in 1893, José de Almada Negreiros was 17 years old in 1910: it was in this atmosphere that he spent his youth. A great figure of European modernism, he has always claimed futurism, but he is little known outside Portugal.

Self-taught, he exhibited his drawings and caricatures for the first time in 1913. He is part of the younger generation of modernity who, throughout Europe, on the eve of the First World War, wants to leave the handcufs and break the locks of those weaked European societies in habits of another age.

Technological innovations accelerate, but morals and society take a long time to follow suit. In response to these inertia, modernists are fascinated by the world of progress, speed and new technologies.

For the idealistic youth of which Almada Negreiros is a part, everything seems possible. With an emblematic energy of the effervescence of Europe of that time, he is engulfed in the breach.

The list of talents of this touch of genius gives vertigo: illustrator, painter, writer and poet, scenographer and choreographer, ceramist and engraver, founder and editor of magazines, but also, in his free time or to work for food, dancer and worker or actor and director. 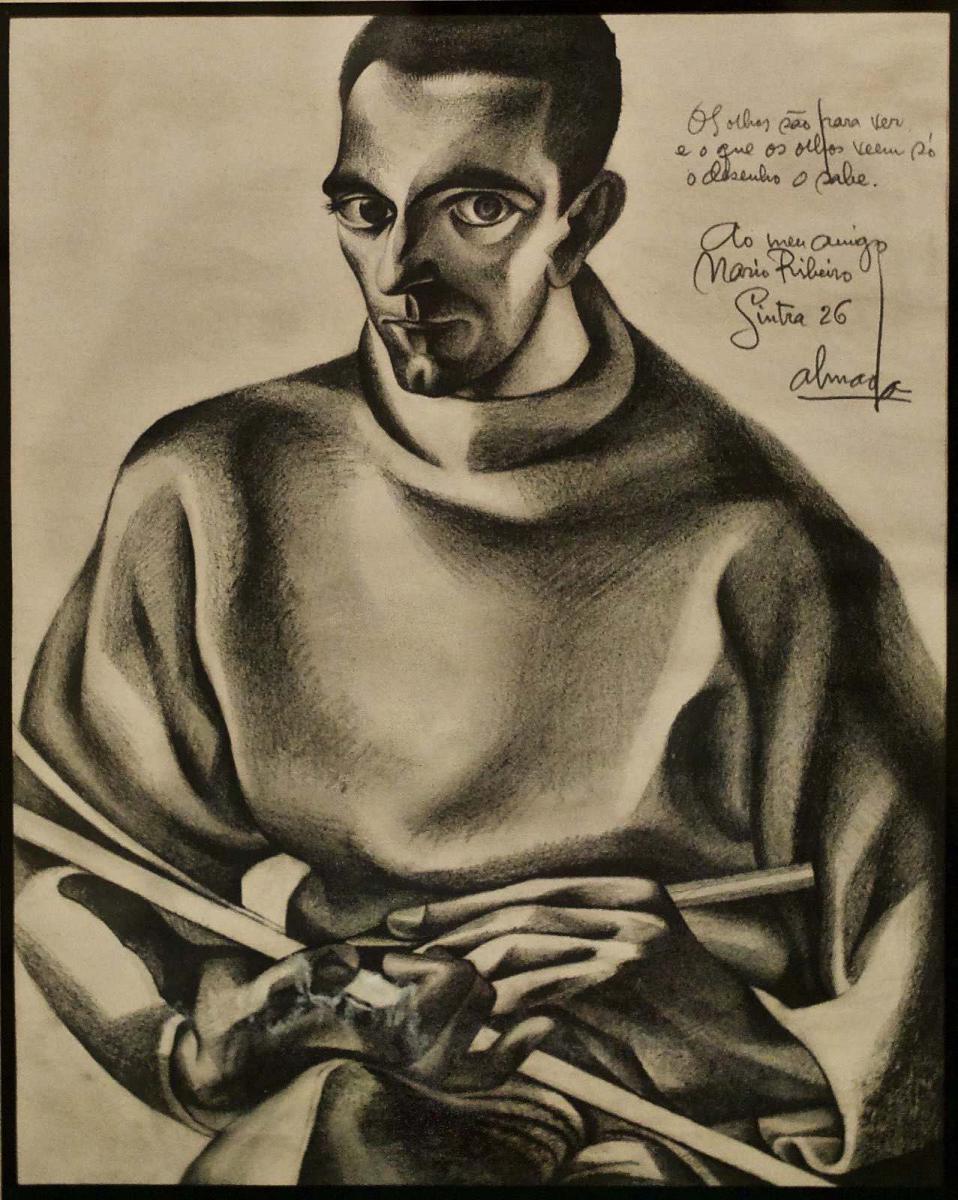 Irreverence as a business card

Similar to Dada, another movement related to Futurism, Almada Negreiros does not hesitate to use humor as a rhetorical weapon. This is evidenced by his Manifesto Anti-Dantas, published in 1915.

Júlio Dantas, a prolific writer mostly known as a playwright, but also a surgeon and essayist, had the bad taste to criticize the modernist magazine Orpheu. Almada Negreiros attacked him, as well as all the compassed academicism which choked, accroding to him, Portuguese artistic life, in a manifesto which he recited standing on a table in the Martinho do Rossio café. The first lines of the manifesto set the tone:

A generation that consents to be represented by a Dantas is a generation that has never been! It is a gathering of poor, unworthy and blind! An oar of charlatans and of the sold, which goes lower than zero! The Dantas is born to prove that it is not because one can write, one knows how to write! The Dantas knows the grammar, knows the syntax, knows medicine, knows how to prepare dinner for the cardinals, knows everything except to write but that's the only thing he does! "

The same provocative tone, difficult to place between hoax and arrogance, is found in his "Futurist Ultimatum": "I am not part of any revolutionary generation. I am part of a constructive generation. I am twenty-three, twenty-three years of health and intelligence. I am the conscious result of my own experience. As a Portuguese, I believe myself entitled to demand a country which deserves me. "

So, Unbearable headache or visionary and provocative genius? These funny protrusions will later overthrow him when, under the Salazar regime, he survives thanks to the orders of the government. But, the latter does not always find the humor of the artist to its taste, and is not far from having his frescoes of azulejos for the maritime terminal of Rocha do Conde d'Óbidos destroyed... They will be spared thanks to the intervention of João Couto, director of the Museum of Ancient Art. 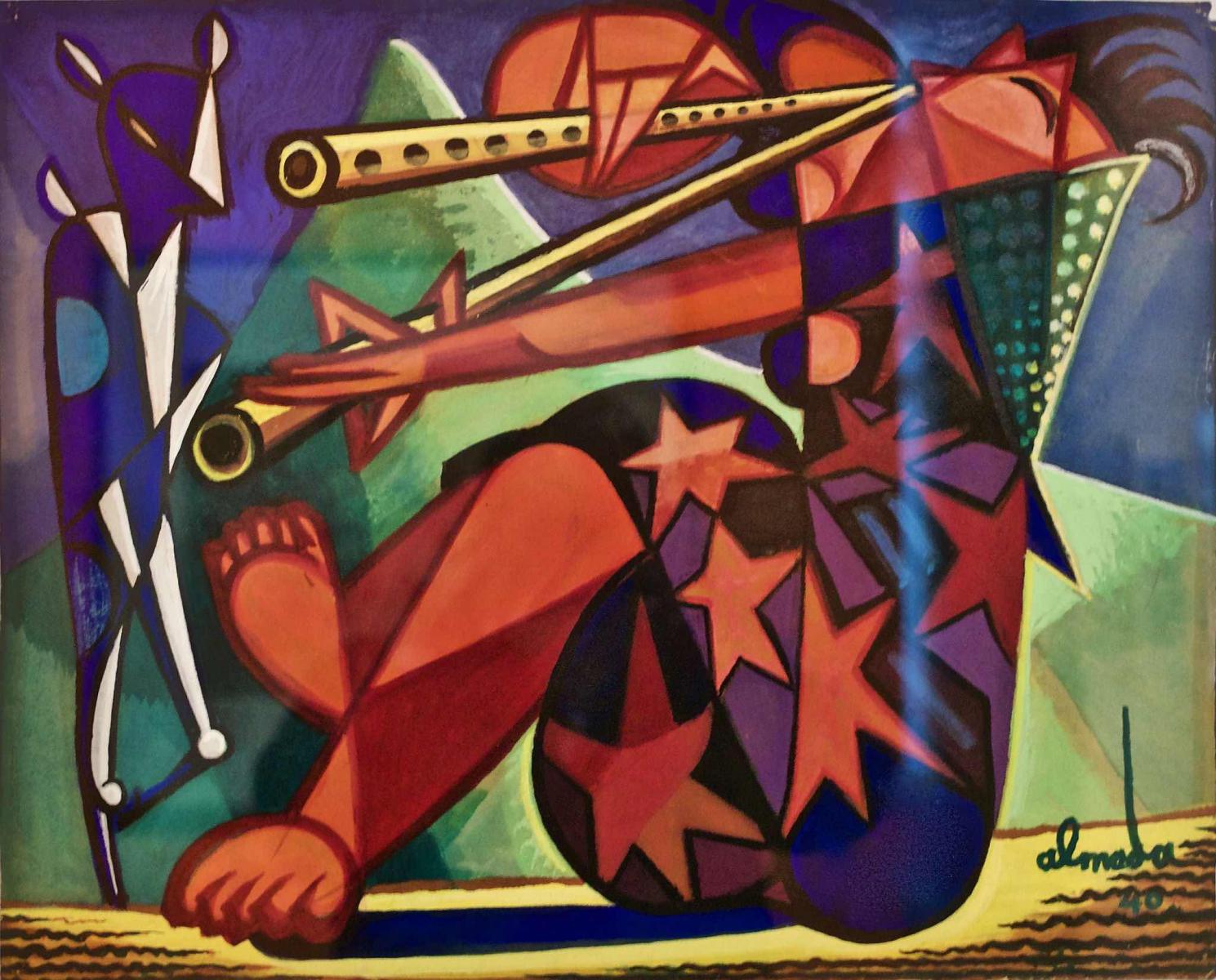 Almada Negreiros does not set back the century, in the posture of the introspective artist: he throws himself headlong into this world of modernity, trying at all costs to accelerate the march and to move Portugal, as in the ardor of his twenty years, seems to him desperately slow. His eyes are not his eyes, he says, but the eyes of the century, in tune with the disheveled rhythm of this twentieth century, which is still brand new at the time and which the avant-gardes, with their typical optimism, still see as full of promises.

For Almada Negreiros, the artist's mission is to produce modernity, to make it happen. The means of this transformation is the spectacle, conceived as a total work of art, which saturates the senses, especially the sight, and which appeals to the public. It is not a matter strictly speaking about agit-prop or a political art: the ambition of Almada Negreiros is rather to install modernity in the public space. Being there, occupying the antenna, and provoking a reaction: the artist publishes essays, manifestos and open letters, especially during the first years of the Salazar regime.

The fever of collaborative projects

Almada Negreiros is never quite where he is expected and he has the soul of a handyman. If it is not possible to set up a show, there immediately, not holding back, he creates a magic lantern: the model, a miniature show, shimmering and changing, allows to liven up the vision in lack of means, pending the continuation and development of an idea. Adapting as a chameleon allows him to multiply experiments and collaborations: he is in his element when he can exchange with other artists in an atmosphere of mutual emulation.

Almada Negreiros flourished in collective projects. Thus the Orpheu magazine that he founded with Fernando Pessoa, the magazine Portugal Futurista, and the numerous stage projects, ballets, operas and theatre plays. All will not succeed, but Almada Negreiros occupies alternately all the positions: scenographer and composer, dramaturge and choreographer, decorator and dancer, he is never as much himself as in the midst of a joyous brotherhood of artists. He thus became friends with Sonia Delaunay, with whom he exchanged an exuberant and supplied correspondence.

These collaborations also allow him not to choose immediately between an artistic career and a literary career: for a long time, he writes as much as he draws and paints. 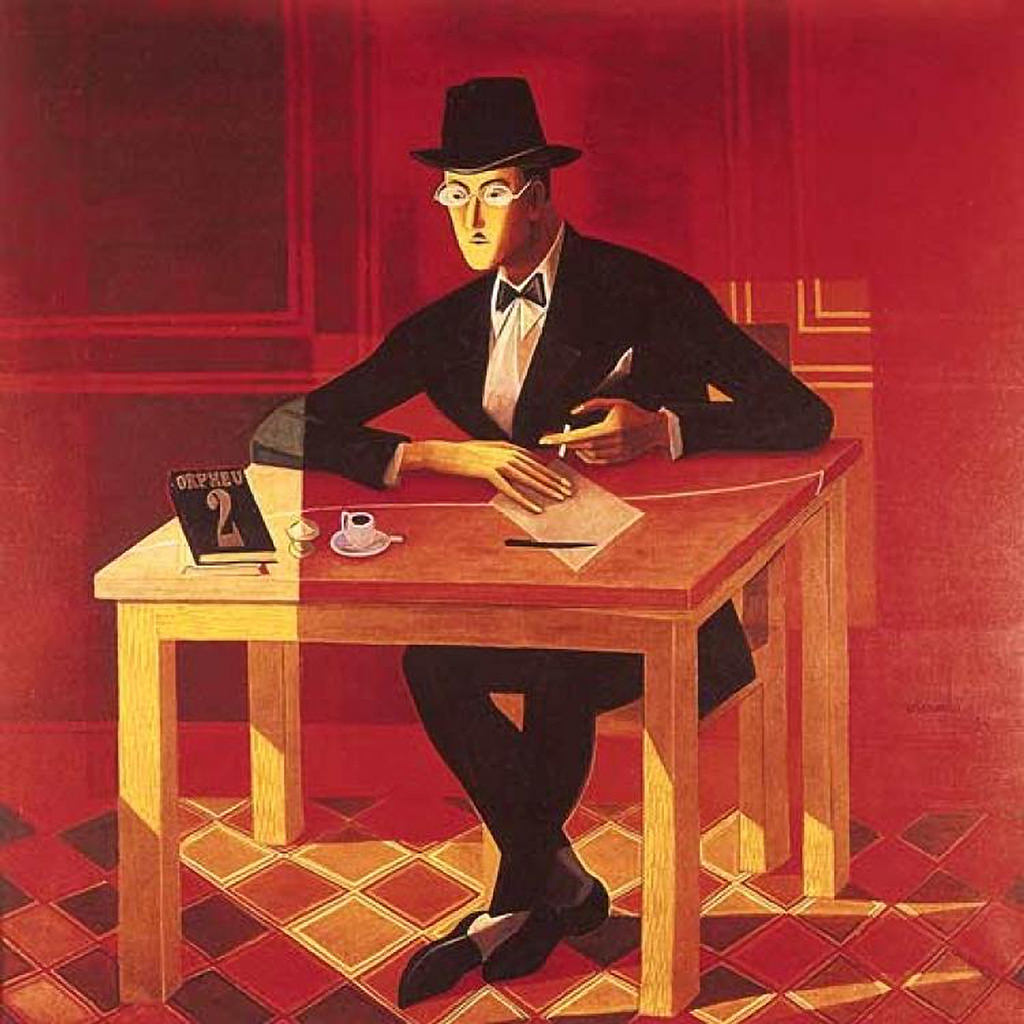 Where to see the works of Almada Negreiros in Lisbon?

To the Foundation Calouste Gulbenkian

The exhibition José de Almada Negreiros: a way of being modern is held at the Calouste Gulbenkian Foundation until 5 June 2017. It presents an unprecedented crowd of previously unreleased sketches and documents that can trace the prolific career of the artist. 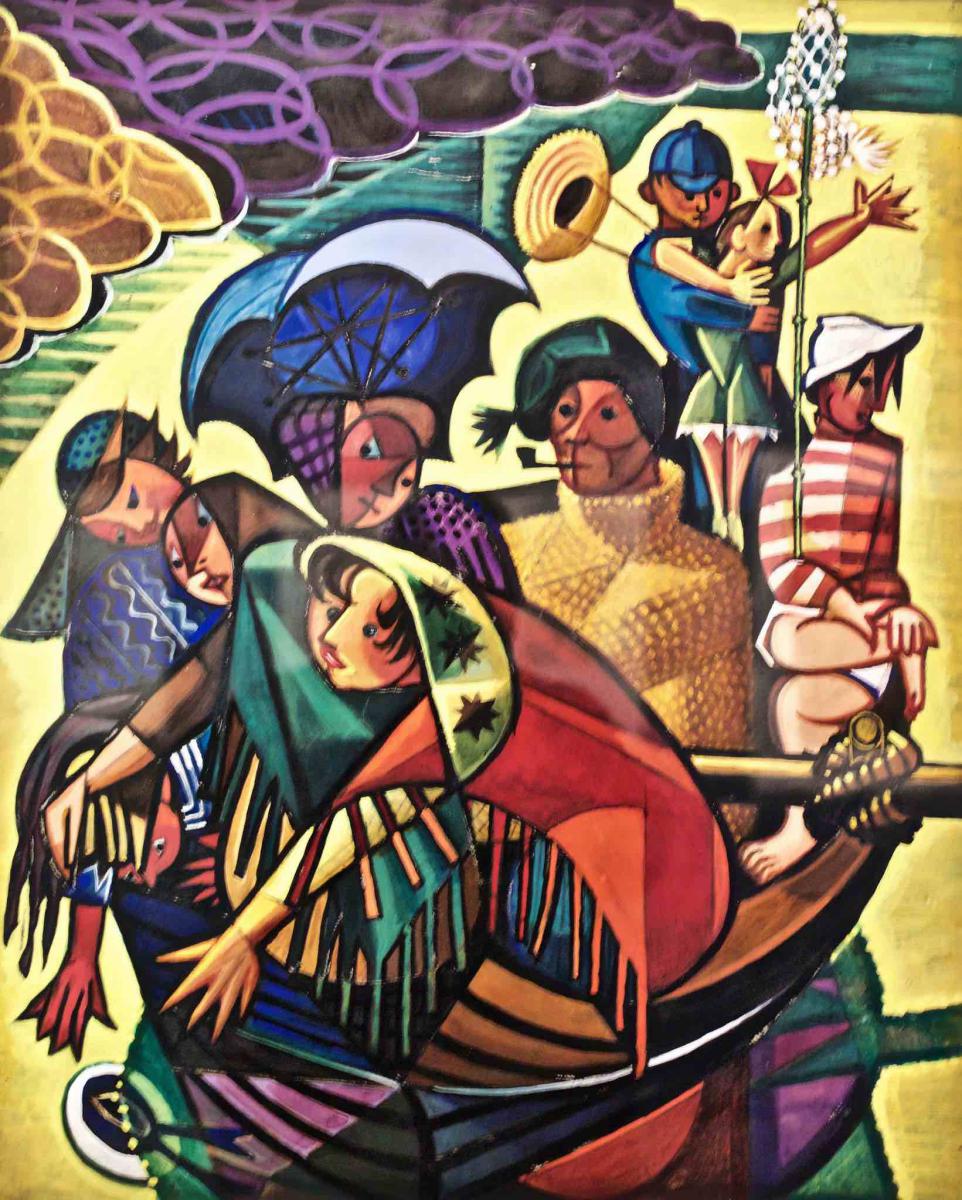 We also owe to the artist the frescoes of azulejos to the port terminals of Alcântara and Rocha do Conde de Óbidos. To reach it: station of Alcântara Mar, or bus 712, stop Doca of Alcântara.

Finally, guests can sit in the lounge bar of the Four Seasons Hotel for a drink and admire several Almada Negreiros tapestries.